Mouse over and click on an icon to view park features. 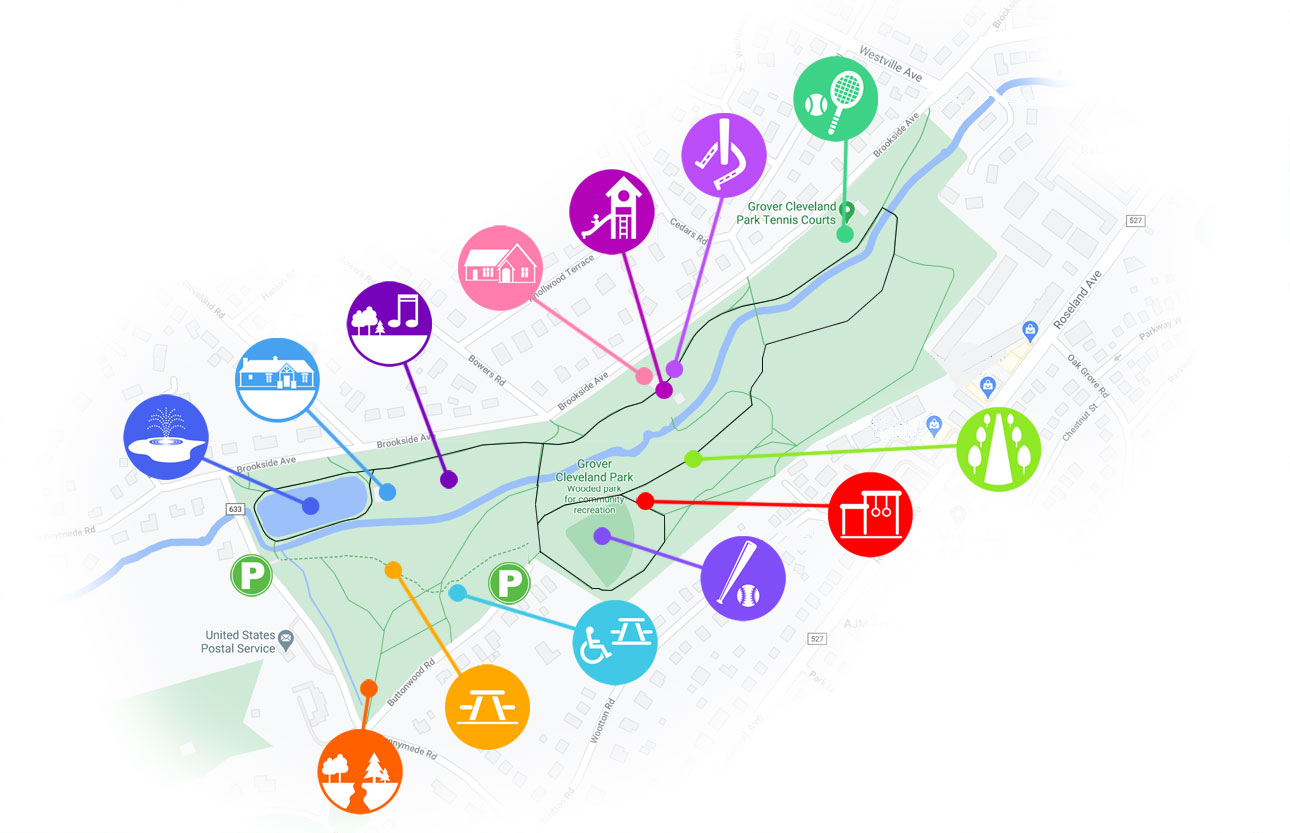 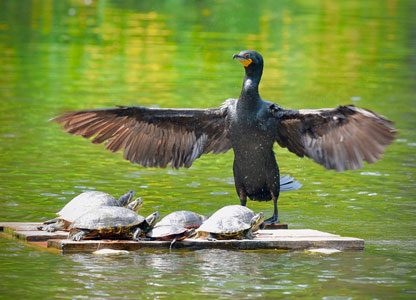 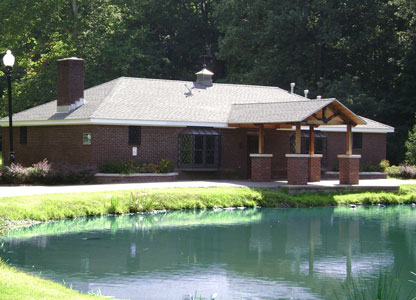 The pond house was renovated in 2006 and offers restrooms and is staffed by Essex County caretakers three seasons. Learn more 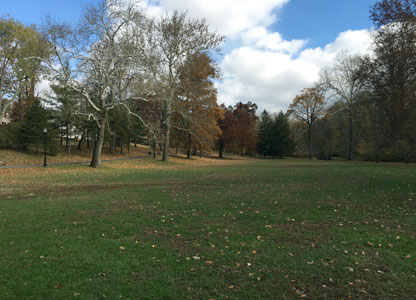 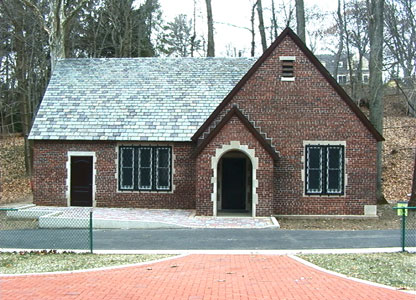 From storytime to crafts or picnics, the Children's House is a place for fun! Learn more 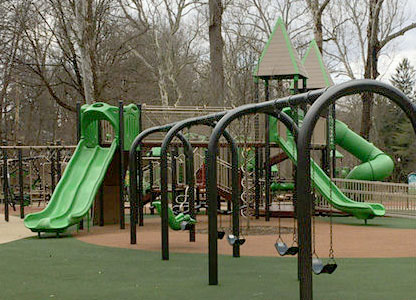 A GCPC committee assisted Essex County with a redesign of the Playground in 2018. Learn more 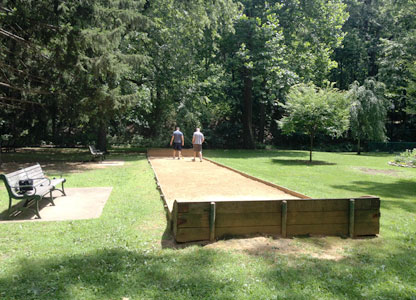 Two horseshoe pits, three shuffleboard courts and a bocce ball court are located adjacent to the playground. Games equipment are available in the Children’s House can be used free of charge. 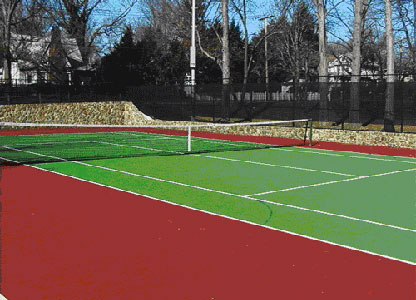 The four lighted tennis courts and surrounding fences were replaced in 2003 with a grant won by the Conservancy from NJ Green Acres Program and matched with funding from Essex County.  The courts were milled, resurfaced and painted in keeping with new tennis court standards in 2018. The daylight-like lighting is automatic from May until November from dusk until 11 pm. 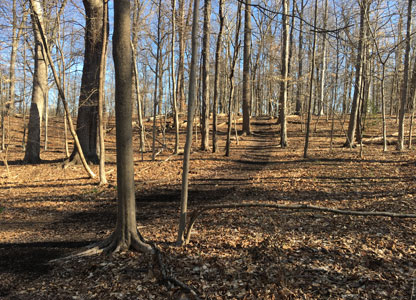 Perry’s Trail begins at the Buttonwood and Runnymede road intersection and winds through the lower woods. Although this trail was on the original Olmsted plan, it was never completed until it became an Eagle Scout Project. This is an important safe conduit trail to encourage walkers to avoid the busy traffic on Runnymede road. Learn more 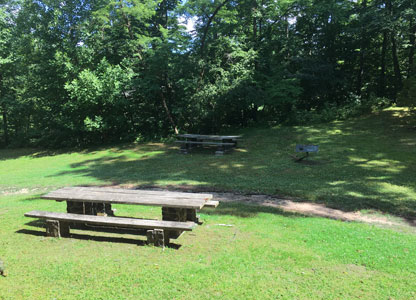 The Picnic Grove is located in the upper section of the park between the Buttonwood Picnic Area and the Runnymede Road parking areas.  A permit is required for large gatherings from the Department of Parks, Recreation and Cultural Affairs. 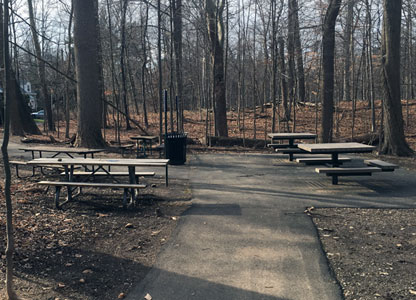 There is an ADA Compliant picnic are with 5 picnic tables available under shade trees.  There is also a shade garden planted with NJ native plants and ferns. 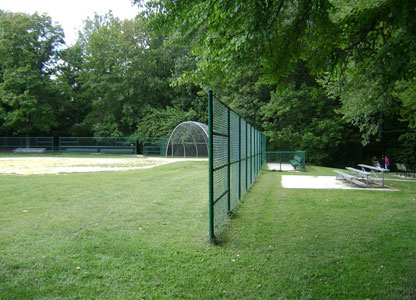 The ball field is used for little league baseball teams, local schools, and community groups.  It was refurbished in 2006 using NJ Green Acres Program grant monies won by the Conservancy and matched by Essex County.  Team benches and bleachers were added for player and spectator comfort and wings were added for player and spectator safety. A permit is required for use from the Essex County Department of Parks, Recreation and Cultural Affairs. 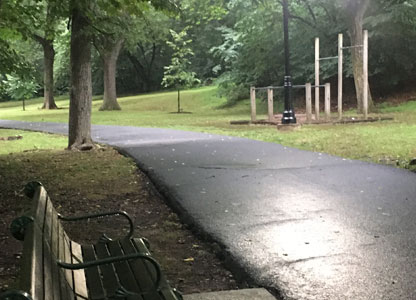 The Exercise Area sits along the path at the end of the Linden Allee just beyond the left field of the ball field. 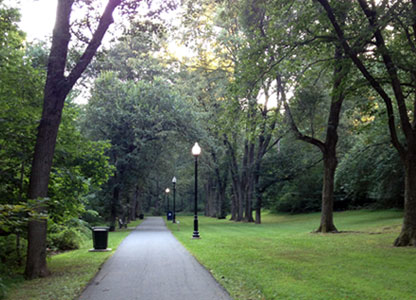 Linden Allée is a spectacular path where people love to walk, run and cycle. Learn more

Who Uses The Park?

The Grover Cleveland Park Conservancy (GCPC) partners with the Essex County Department of Parks, Recreation and Cultural Affairs in its efforts to maintain and enhance the park, and it strives to be a positive contributor in the West Essex community.

The Conservancy serves a diverse audience who use the park on a daily basis throughout the year.

Walkers – many elderly walk around the pond on the flat areas or traverse the hilly paths if they are able; small groups and individuals of all ages walk for exercise throughout the day as well as employees from area companies during lunch breaks.

Runners – running on the paths and through the woods individuals utilize the paved paths from early morning until after dark when the pats are well-lit. The James Caldwell High School running clubs also use the park for practice. The Caldwell West Caldwell Education Foundation utilizes the park for their annual Spring Fundraising run. There are mile markers in the park that were installed as an Eagle Scout project. See Running Path Map.

Exercisers – there are local exercise leaders who utilize several areas of the park for small classes in yoga as well as more rigorous exercise.  The areas used include the field behind the Pond House, the upper level near the parallel bars and the playground.

Dog Walkers – individually and in small groups, ‘pet parents’ walk their charges all day long but are especially prevalent early morning, at lunchtime, after work and in the evening.

Children/Teens – moms, grandparents as well as nannies bring children — toddlers as well as older kids — to the playground.  The local chapter of Girls on the Run meets after school behind the Pond House.  The girls also run around the pond for exercise challenging each other to run the most laps.

Families – families often gather in the meadows by the tennis courts, the Great Meadow behind the Pond House. They use the areas for picnics, games and socializing while still social distancing. Individuals also use the area for sunbathing and reading. 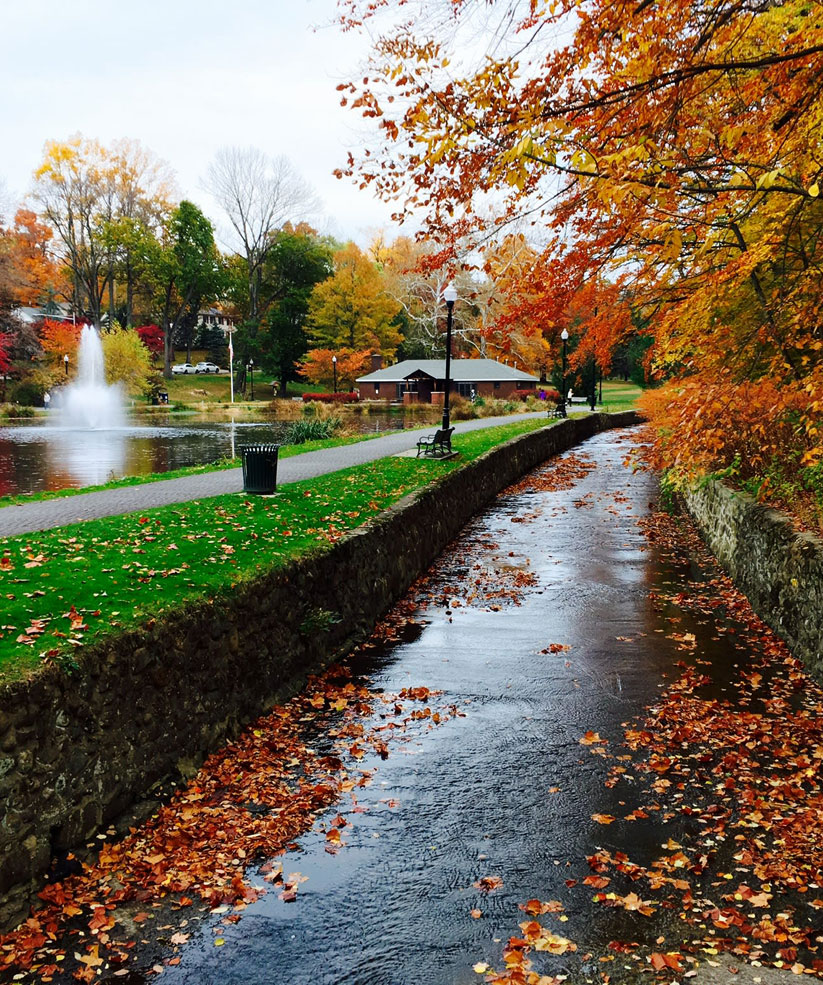 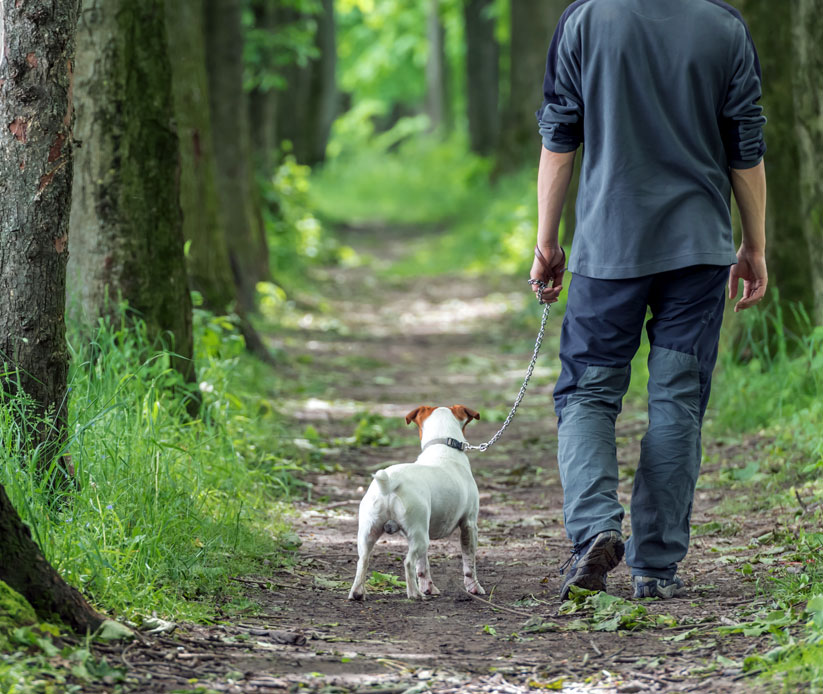 Please be certain to leash your dog and clean up after it. 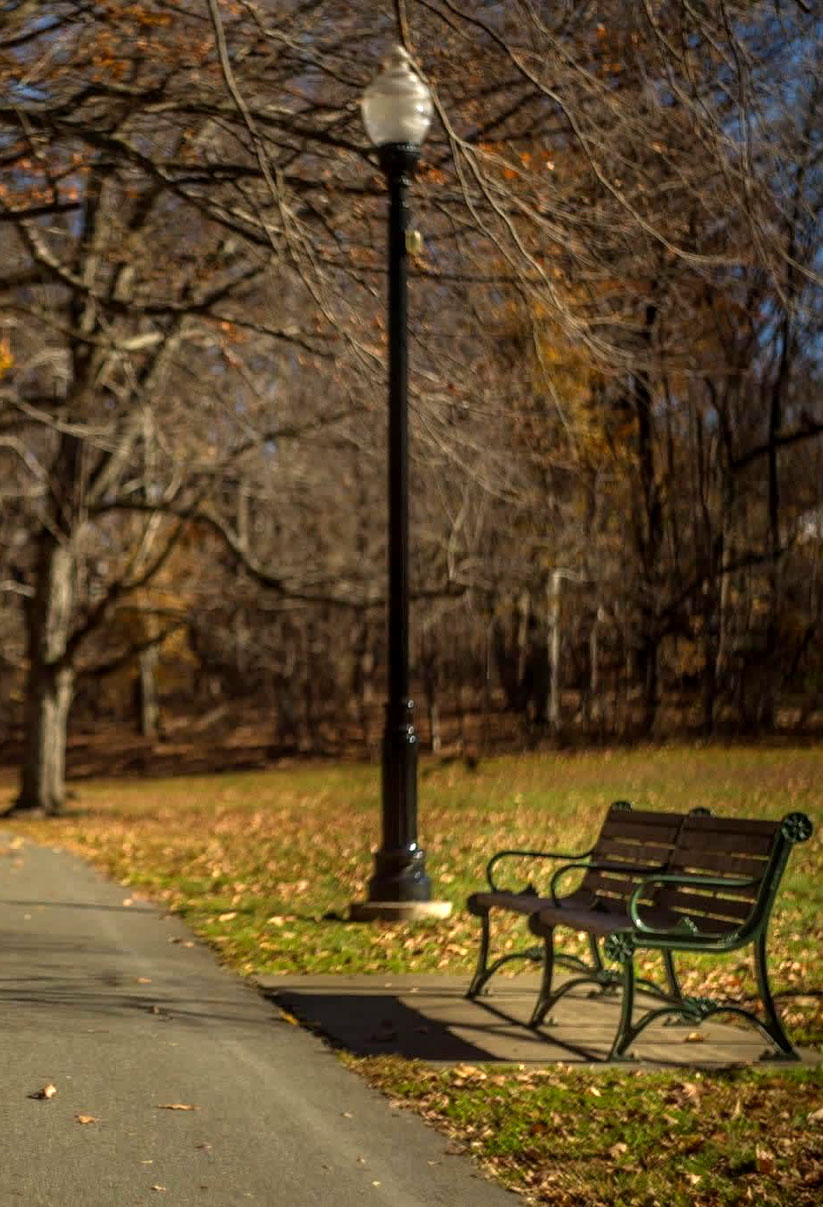 It is the 10th largest of the 24 parks in the Essex County Parks System.

Located in Caldwell on Brookside Avenue and in Essex Fells on Runnymede Road. 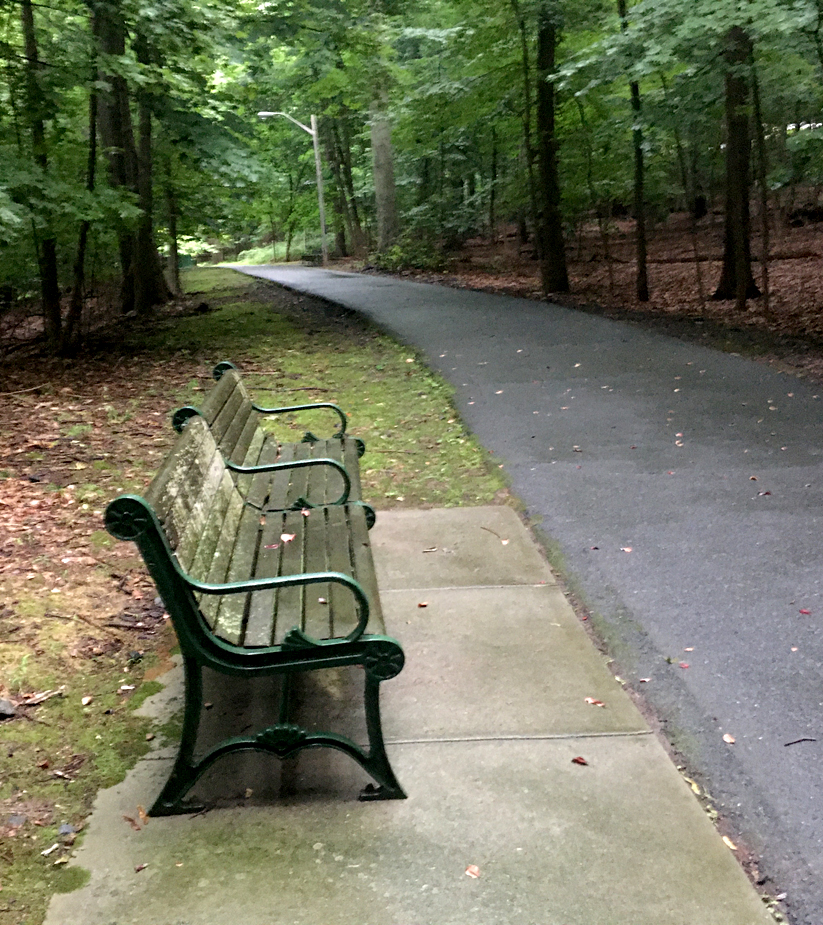 Benches throughout the park make a welcome spot to rest and enjoy the wildlife. 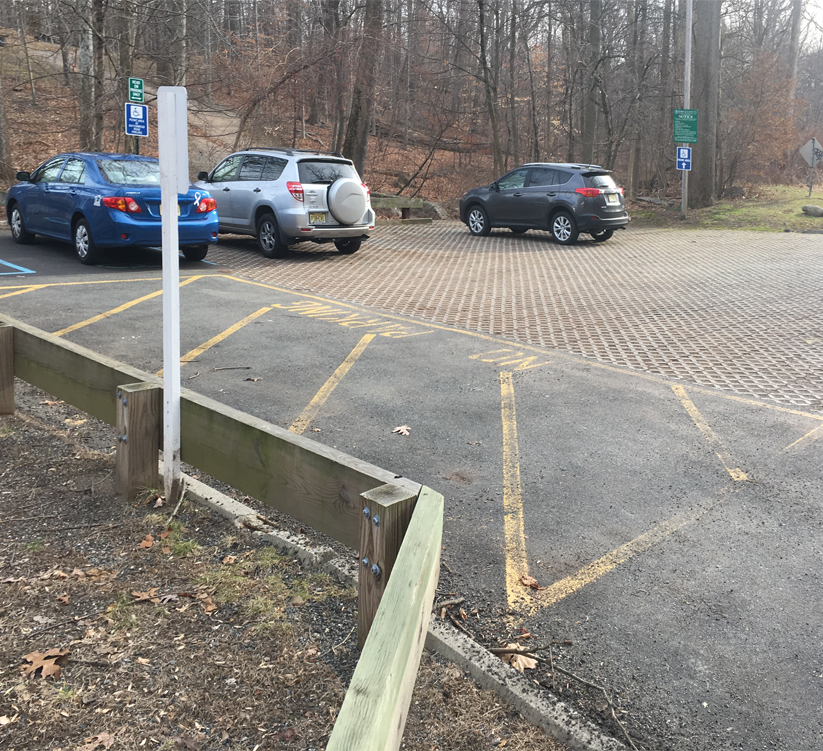 Handicap accessible parking and trails are available in designated areas. 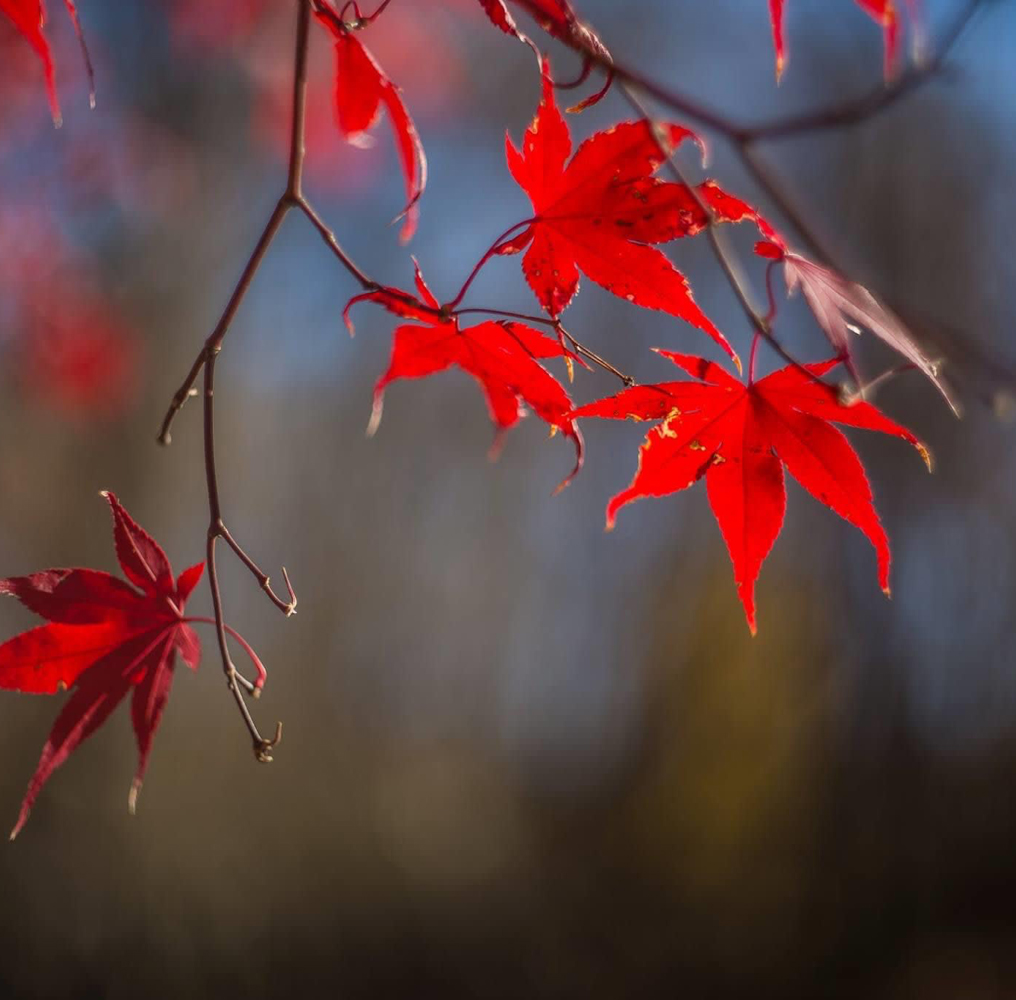 2020 Photo Contest Entry – Matt Brodie – The Japanese maple next to the playground.